This harp was built by John Egan in about 1820. It is distinguished by the mechanism which uses knobs, also known as ditals to change the pitch of the strings. When a knob in the inner part of the column is pressed an internal mechanism activates a disc on the neck which raises the notes a semitone allowing all the notes to change at the same time. For example, when pressing the C button all the C’s change, this is similar to Sébastien Erard’s single action pedal harps. It is worth noting that the the circular soundbox is also typical of Erard’s harps.
This harp is complete with its original sound box and ivory tuning key. The rich decoration in an Irish mannerist style is typical of the romantic taste of the English nobility.On the neck there is a shield with the inscription: This improved Irish harp was invented & made by John Egan Dublin, & his two sons John & Charles Egan, 1820, whose date shows the patent application. The two ivory buttons, one on the neck and another on the column, were used to attach the support belt. 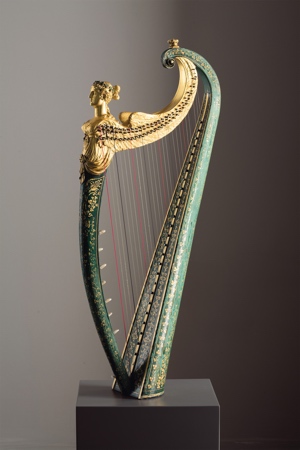