Great Britain
First half of the 19th century

This instrument is likely to be of British origin and is characterised by the peculiar shape of the front column. Since there are no features on the neck it seems that there was no existence of a mechanism for changing the pitch therefore a diatonic tuning may be supposed. On the neck just below the small metal crown where the soundbox is fixed, there are two holes which were probably used to attach a support belt. The decorated style reminds us of the small non-pedal harps which were built in the British Isles during the mid 19thcentury. Of particular interest are the two classical figures painted on the base of the soundboard which probably portray Apollo playing the cither and one of the Fates unrolling the scroll of destiny. These figures are very similar to ones which appear on pedal harps during the first half of the 19th century. 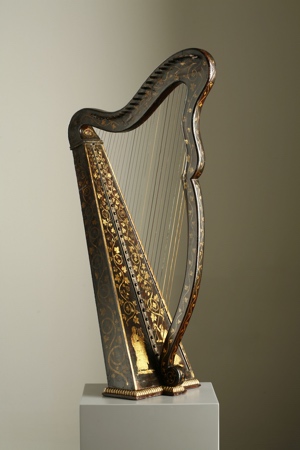