The printed label pasted on the inside of the resonator of this harp reads as follows: NADERMAN Maitre Luthier, Ordinaire de Madame la Dauphine, Rue D'argenteüil, butte Saint Roch a Paris, ce 1770; therefore it is a harp manufactured by Jean-Henri Naderman (1735-1799), the founder of the famous workshop, exactly in the same year in which the future Queen Marie Antoinette came to Paris, becoming Madame la Dauphine (as she married the dauphin of France). There is also another label inside the resonator with the signing of a nineteenth century restorer. This instrument, which is totally made of natural wood, has rather simple decoration: gilding is present only on the top of the pillar, on the base and on the pedestal, while there are three pairs of flower bouquets, concealing the sound holes, which are arranged in four groups, each having six holes, plus two isolated holes on the top part of the soundboard. The sound box is composed of seven staves with no opening. 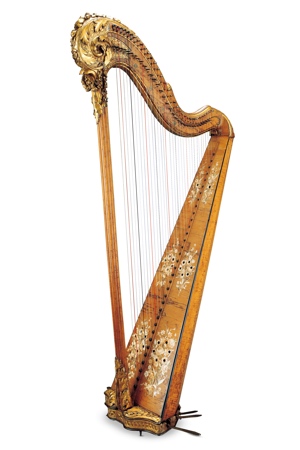