This harp is signed: J. & J. Erat Patent Harp Manufacturers 23 Berners St. London, No. 2072; in addition, there is a title block under the figurine that decorates the front part of the gothic capital with the writing: I & I Erat published 1846. The soundboard has a semi-circular section with five trapezoidal holes on the rear, which were originally closed by the swell doors, operated by the reinforcing eighth pedal (now removed). There are wooden reinforcements inside the case, applied during a past restoration, as several metal reinforcements under the bottom case; even the board has partly been doubled with a spruce sheet and the high part of the pillar has been partially reconstructed. Erat harps are generally inspired by Erard models and reproduce the constructive features, from both a structural and decorative point of view. This example is clearly inspired by the “gothic” model of Erard, with decoration in the romantic neo-gothic style, with figurines and pointed arches on the hexagonal section capital, and winged griffons on the pedestal. 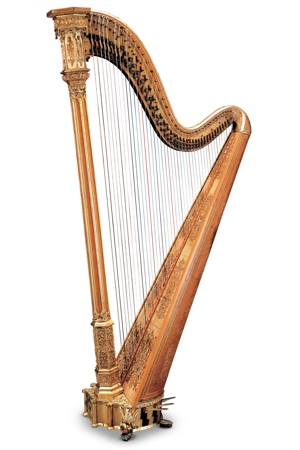