This harp is signed: Sebastien Erard’s Patent N 2377 18 Great Marlborougn Street, London. On the other side of the neck we can read: Maker To HRH the Princess Charlotte of Wales, His Most Christian Majesty the King of France and HIM the Emperor of all the Russias.
From a structural point of view the soundbox is a semicircle shape which has reinforcing chains on the inside. The neck is made of stratified wood which has been reinforced with a brass plate which encase the double movement mechanics.
The semicircular soundbox has 5 rectangular holes on its back which can be opened and closed by using the eighth pedal.
As far as the decoration is concerned this instrument belongs to the “Greek harp” like instruments with a winged sculptured fame figure on the column, palmettes and Nikai on the plinth. On the soundboard’s lower part there are classical feminine figures with musical instruments, while other figurines are painted on the doors at the back of the soundbox. Note the thick decoration that trims the soundboard with urns, laurel wreaths and mythological figures. 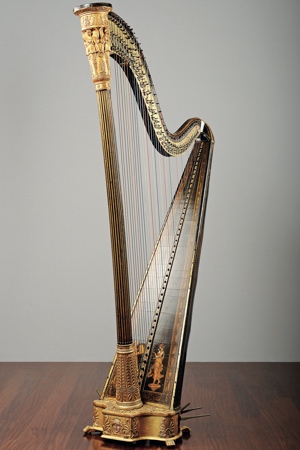