Wales
First half of the 19th century

This model of Welsh Triple harp has 99 strings arranged in three rows. The two outside rows play the diatonic scale, while the inside one consists of strings that are chromatically tuned. Since the strings alternate regularly (a chromatic string between two diatonic strings), this harp has seven chromatic strings per octave, so that major and minor semitones can be achieved. The Welsh harp, as the ancient Irish one, was held on the left shoulder and was generally tuned to G Major. It is worth noting the squatting lion sculpture. It was probably assembled by using parts of different harps. A presence of pins for attaching a support belt on the neck and on the base of the column shows that this instrument was used by street musicians. 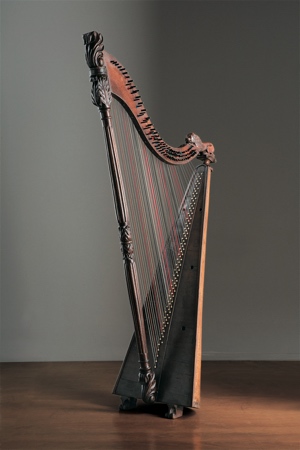