Mangbetu, Republic of the Congo
First half of the XX Century

During the early part of the 20th century tourism began to thrive. To take advantage of this new economical development, African artisans began to carve fictional sculptures of the harp from precious materials. It was not an authentic instrument not intended for musical purpose. This type of arched harp, traditionally strung with five strings is linked to the manufacturing region of Mangbetu, river Uele in the Republic of Northern Congo. It dates back to the early 20th century. The soundbox is covered with snake skin while the ivory neck is aligned with the structure of the box and is decorated with three overlapping motifs. The lower level is a head of a crocodile with an open jaw. From this the half naked body of a woman with raised arms holding a vase, from which emerge fish and birds. 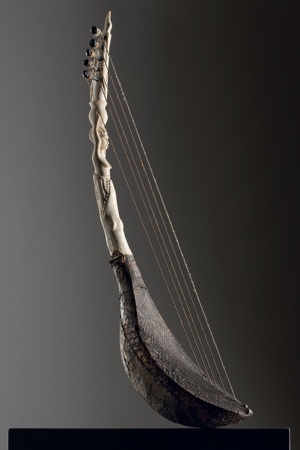