This harp, from Gabon was built by the Kele people, who lived in the region of the river Ogooue, Northern Gabon. The soundbox has been carved from one piece of wood, the neck, which was three quarters the length of the instrument was added at a later time. The harp has eight metal strings, probably tuned according to a whole tone scale. This kind of harp has been known in the West since the 17th century. Essays such as “Syntagma Musicum” (Wolfenbuttel, 1619) by the music theorist Michael Praetorius give an insight into the development of the harp. 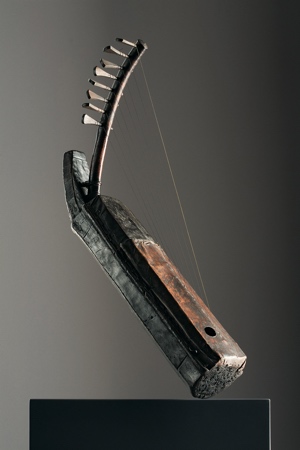